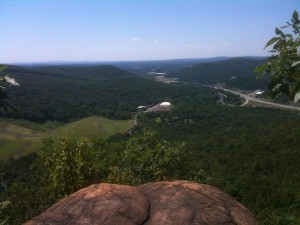 This loop isn’t overly long at just under 8 miles, but there are enough hills and scrambling sections to rate it on the low end of “challenging”

After tooling around our GPS data the other day, I noticed a big empty spot where the Seven Hills and Hillburn-Torne-Sebago (HTS) trails are.

Hunh. That meant we likely hadn’t hiked that area since starting to keep our data… circa 2005 or so. (We use Garmin BaseCamp to organize our GPS data, check it out if you are also an over-organized hiking geek. Free.)

This loop isn’t overly long at just under 8 miles, but there are enough hills and scrambling sections to rate it on the low end of “challenging”.
For anyone familiar with Harriman State Park… you know that the trails that start from Reeves Meadow are just screaming with people on weekends. We tend to avoid it, but the fact is there are a lot of really nice trails there so sometimes you just deal.

The route is relatively tame until the big scramble up to the views on HTS at Ramapo Torne with a view of the NYC skyline in the distance. (Dogs may be reluctant on this… the German Shep behind us got up it but we heard a “you can’t be serious” whimper!)

We kept on HTS after Raccoon Brook Hills (RBH) intersects it. I don’t think we’d ever taken this section, as we usually always seem to end up on RBH. We really enjoyed this stretch from this point until we hit Pine Meadow, it was a bit overgrown and we saw no one so it felt nicely isolated. 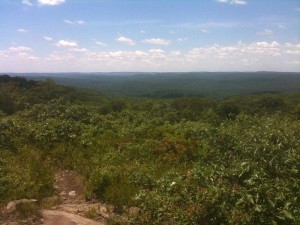 We turned right onto Pine Meadow for just a bit then got on Seven Hills again for several nice views and finally a long, steep scramble down right before the junction with Reeves Meadow. I find scrambling fun when going up, less so while going down, and this one was no different.

*Be sure to have a 2012 or later version of Harriman-Bear Mountain Trails. It notes where bridges are out from Hurricane Irene, many of which are located along the trails in the Pine Meadow Lake area.

Parking: N41 10.447 W74 10.117 [Reeves Meadow Visitor Center]
There is a small lot at the center, and one just down the road on the opposite side… but they will be full unless you arrive early so you’ll likely need to park along the road. We didn’t get there till 9:30am and I checked our GPS data just for giggles… our parking spot was a tenth of a mile from the lot.

Snacktime: We tried out a couple KIND bars

I’d picked up on sale. Blueberry Pecan and Nut Delight were both tasty, though not very filling – which is good/bad depending on your needs. The Nut Delight was similar to a Clif MOJO bar. We also split a Banana Bread Larabar