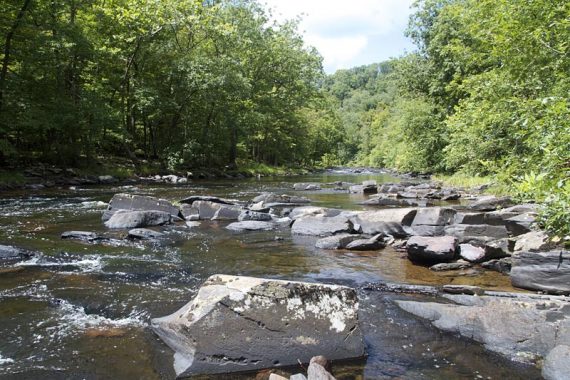 Two adjacent parks that pack dramatic vistas and pretty forest into a short hike along the High Rocks cliffs overlooking the Tohickon Creek below.

Our two cents: Worthwhile because of the great views in a short hike (3-4 miles or less) but probably not enough here for avid hikers looking for a longer hike.

Miles: 6.5
(Since the trails aren’t marked well or easily described there isn’t a good way to list a route. This mileage includes us wandering off on tangents, which is why I have not posted the GPS track!)

Restrooms: Composting toilet building in the parking lot by the picnic pavilions and the map also shows them at the other parking lot; also at a field in Tohickon Valley.

Note: This was hiked 8/4/2013 and the maps appear to have been updated since.

A few weeks ago we were biking the D&L rail trail in Pennsylvania which basically passes right near this area – and that jogged my memory that we wanted check it out.

We’d never gotten around to checking out either park because hiking books and the park sites themselves only show a limited trail system that wasn’t worth our drive here – plus the trail maps were lacking.

In fact, Ralph Stover lists a whopping 1 mile of trails. Then Gone Hikin’ managed to do a long hike here so we thought, well, maybe it’s worth checking out.

The trail maps for these two parks are really lacking, plus there are many casual trails branching all over. There are yellow or red dot on white blazes… occasionally. This makes it a tad difficult to describe a route.

We started from the Ralph Stover parking lot, heading over the red bridge and following a quiet residential road until there was an obvious trail into the woods on the right. This is roughly .5 mile from the parking lot. (Optionally, start from the High Rocks parking lot of Tory Road and this would cut out the road walking.)

Soon the trail splits in two, we took the right side to follow along the High Rocks Vista for several overlooks. The cliffs have a steep drop-off and are behind black metal safety fencing. Chains are attached to the rocks in some areas, and the occasional rock climber might be spotted coming up the rocks from below.

Now, I’d prepped by reading various descriptions of the trails but expected it might be best to wing-it.  After the High Rocks area we eventually ended up at an open field in Tohickon Valley.

From that point we decided to ramble off on trails to see where they led, hoping to piece together a longish route. Since the park is a rather narrow piece of land between roads and the creek, it’s not really an issue of getting lost.

That was fun for a bit but turned frustrating as we kept hitting dead-ends, trails that were overgrown and impassable, and side trails that petered out to nothing.

We turned before a park road and followed a trail that led… back to itself. We came back and crossed the road, following a trail that led behind the pool… and then that turned too overgrown. Backtracking, we picked up a trail that branched off… but just led back to the road. You get the idea.

After taking a trail straight downhill to the cabin area at creek level and looking around, we decided we were out of trail options and headed back up the park road. After a few more false leads, we made our way down a trail to creek level.

I was certain I’d seen a map diagram for a really short hike that included a trail along the creek. While it was beautiful at the creek, there was no real trail to follow – we just picked our through tall grass and over rocks – i.e. some mighty fine snake hiding spots (and I thought I’d read somewhere the area was home to copperheads so I was really stepping extra cautiously.)

An actual trail never materialized and we decided “enough”. Having no interest in tracing our way back along the creek we started looking for a spot to scramble up the hill. It was steep and we’re not recommending it… though we did spot other boot prints.

Back at the parking lot, we checked out a short trail to a cave (unmarked trail entrance is behind the pavilion near the restroom). The cave looked like it went in pretty far but with our luck we’d shimmy in there and come face-to-face with some sort of unamused critter.

Overall, surely we missed some trails or interesting features without a decent trail map available, and it would take another visit or two to get a real handle on this park – but we did have a bit of an adventure. Surely, locals know all the good spots and trail loops.
—
Hiked: 8/4/13