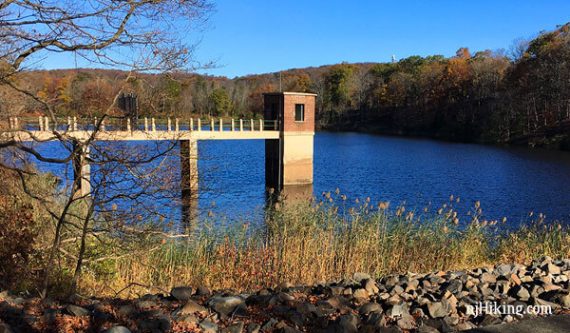 Map: Print it out from the park site or paper maps might be available near the kiosk.

Books: A variation of this route is in 50 Hikes in New Jersey.

Update 3/2016: Added the newer map that has more details and is easier to follow; the description below was created prior to this map.

Parking is a large paved lot on the left after a bridge. Note: Coming up 287 N from south of 22, Google took us around another way via Foothill Rd.

There is another lot at the hawk watch and a small lot on Gilbride Rd that is not marked on the map.

Restrooms: Porta-john in the Newman’s Lane Lot, and in the hawk watch lot (which possibly might be seasonal and only during the hawk count).

The trail markers are geared for short loops within each section of the park, which is how most people probably hike here, but it can get a little confusing to piece together a longer hike like this.

The trails are marked as ‘inner’ (circle markers) and ‘perimeter’ (square markers) with “connector” trails (black C on white regardless of the color trail they are associated with, but shown as a solid color on the map).

There seemed to be a few minor inconsistencies between the map and the actual trail.


BLUE loop: Cross the road to the trail, follow the SQUARES for the perimeter trail. Return to the lot.

0.0 – Start following RED Perimeter (RED SQUARE) from the end of the lot furthest from the road entrance. It will follow the reservoir with some viewpoints overlooking the water.

0.7 – Go through a break in a fence to a woods road. (This is marked as a Connector on the map but we didn’t notice blazes in either direction). Turn LEFT to continue following Connector (Black C on WHITE CIRCLE) along a woods road [This woods road also goes to the right, and leads to other RED trails).

Behind a fence, a bridge out to a building on the reservoir comes into view.

0.9 – The continuation of the trail is hard to spot: cross busy Chimney Rock Road and walk to the left end of the guardrail. This is a Connector but is not marked right away.

1.6 – Turn right onto Gilbride Road and walk over the bridge, then turn right after the bridge to get back on to the trail. There is a small parking area across the road.

This trail section seemed to be unmarked but has views along the water so we took it. Shortly, arrive at a junction near a footbridge, with YELLOW and the actual Connector coming in from the road.

2.6 – Cross a paved road to continue on YELLOW Perimeter (YELLOW SQUARE). [Option: Turn right and follow the paved road straight to the hawk watch to shorten the hike].

2.8 – Continue on YELLOW Perimeter (YELLOW SQUARE) passing a Connector on the right.

[Option: Turn right and follow the Connector to shorten the hike, it should loop around and rejoin YELLOW Perimeter and reduce the mileage… but we’ve not done this to check and think the trail map is missing some trail detail here so heads up if you decide to try it.]

Continue on YELLOW Perimeter (YELLOW SQUARE), passing a trail coming in on the right then quickly leaving left, then passing another trail on the right.

3.0 – YELLOW Perimeter (YELLOW SQUARE) approaches a road, then curves to the right as it heads downhill around an old building foundation. Continue above Vosseller Ave which can be seen (and heard) below, before heading back uphill on a series of long switchbacks (the zig zag of the trail is not noticeable on the trail map).

4.0 – The trail ends up on a road… it seems like you want to make a left… but you want to turn RIGHT here, then LEFT at the road in a few steps and continue down the road to the parking lot for the hawk watch. At the far end of the lot, walk through the gate and continue on the path towards the overlook/hawk watch.

4.2 – The hawk watch overlooks a rock quarry… so while interesting, it’s not that scenic. Hawks like it though, and a hawk count is kept from August-November, more info here. From the hawk watch, continue on YELLOW Perimeter (YELLOW SQUARE and co-joined with CIRCLE which leaves to the right at one point).

4.5 – Top of a dam can be seen on the left, below the trail. Go steeply down to the top of the dam and Buttermilk Falls. It’s steep to get down closer to the falls.

[Option: There are cascades in the water in front of the concrete dam but to see all requires a somewhat dicey scramble down to and then along the water’s edge.]

Return to the top of the dam and follow an unmarked trail along the East Branch Reservoir. This isn’t technically YELLOW but meets back up with it.

4.9 – Back to Gilbride Road… turn left on to the road and go over the bridge, then left again on to the trail.

5.4 – Switchback and pass a Connector on the left.

5.9 – Just before Chimney Rock Rd, turn RIGHT on an unmarked trail and follow it along and down to the road. Cross the road and walk through an opening in a fence to start following the WHITE Connector along the other side of the reservoir (may not have actually been marked a connector other than the map).

6.3 – Continue following WHITE Perimeter (WHITE SQUARE) over a bridge (being constructed when we hiked this) and along the water.