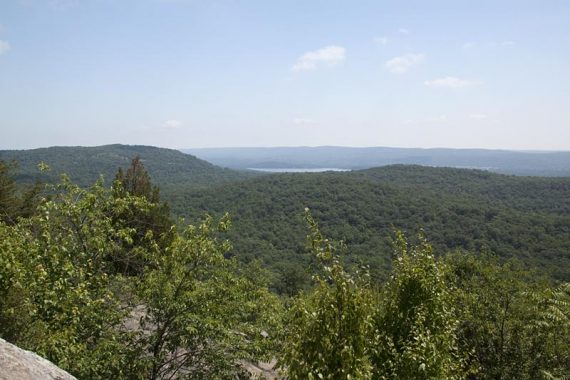 Note: This longer version past Osio Rock can no longer be done due to change in ownership of Camp Vacamas; old route archived below.

The views just didn’t stop on this hike… Hewitt-Butler trail follows along the ridge so there are views almost the whole way. Gorgeous.

There are 360-degree views from Osio Rock (too hot-n-hazy to see NYC today), and we assume most people turn around here.

We had intended to as well, and go back to Otter Hole to add in a loop from the main part of Norvin, but changed our mind and decided that since the trail goes off the map edge with the notation “To Camp Vacamas, 1 Mile”…. we needed to see where that took us. 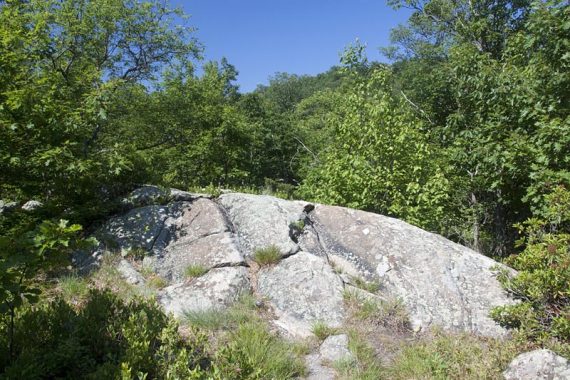 Trail surface is a bit rocky… 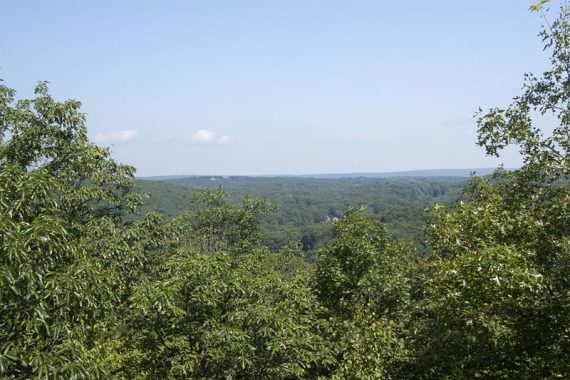 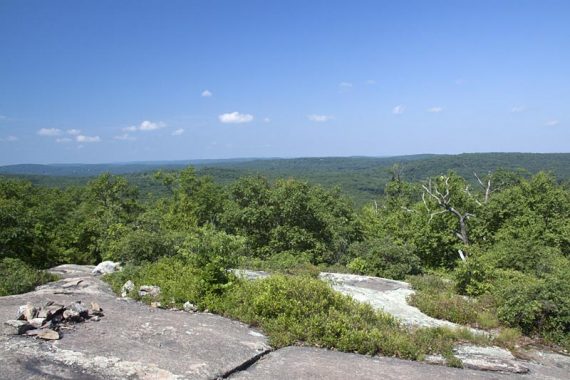 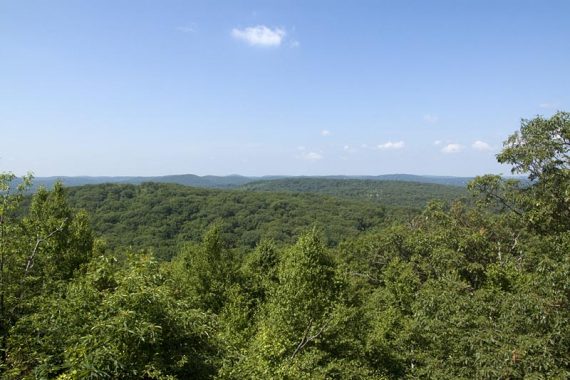 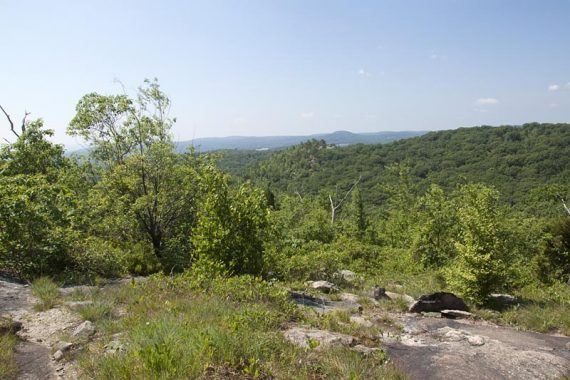 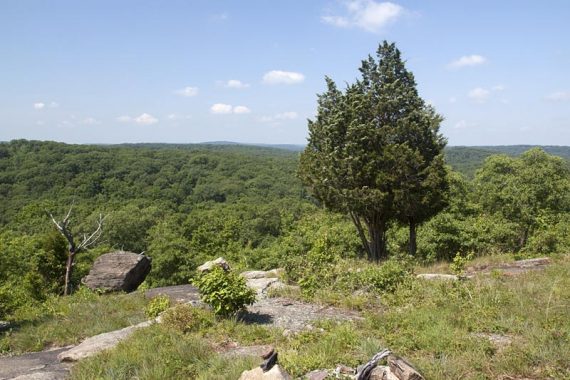 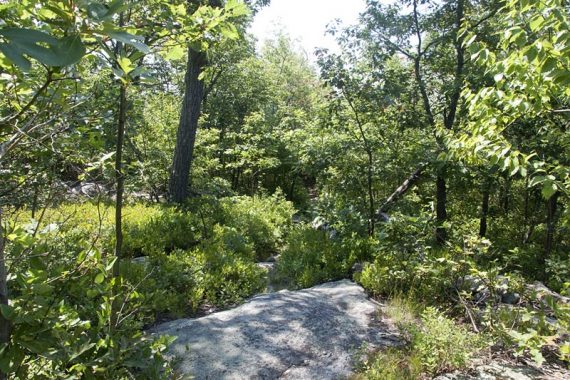 The trail when it’s not along the ridge. 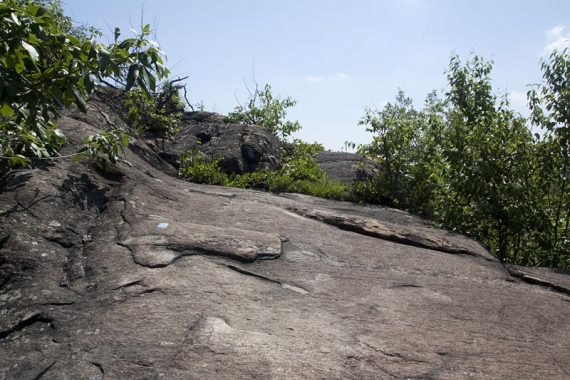 Some rock slabs to scamper up… 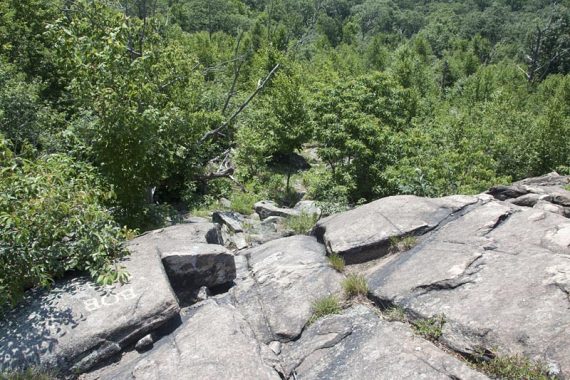 …and some to scramble down. 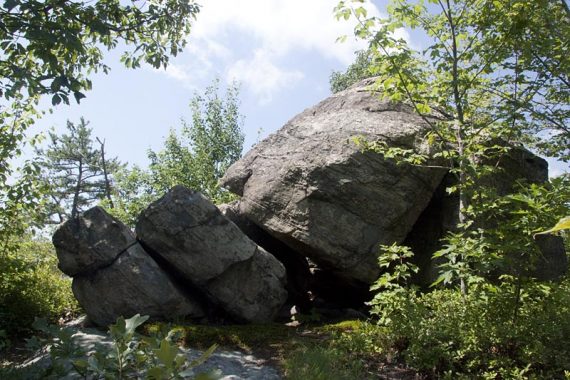 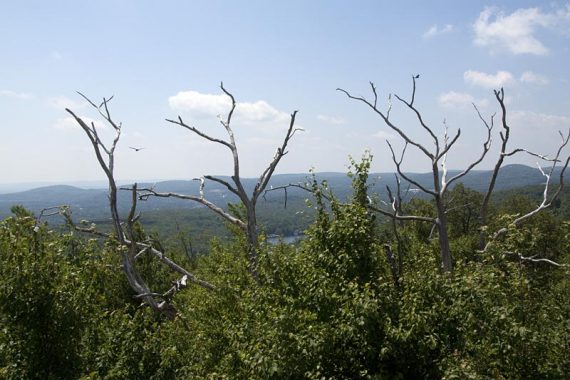 We continued on as the trail did some steep, rocky, dry and dusty switchbacks down Osio Rock (with some early ripe blueberries to keep us occupied mmmm). 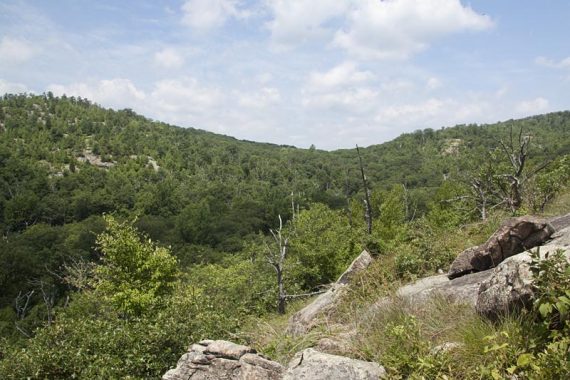 Then the trail entered into some pleasant shady forest and became pretty level… which was a nice change from the rugged trail and all the sun. 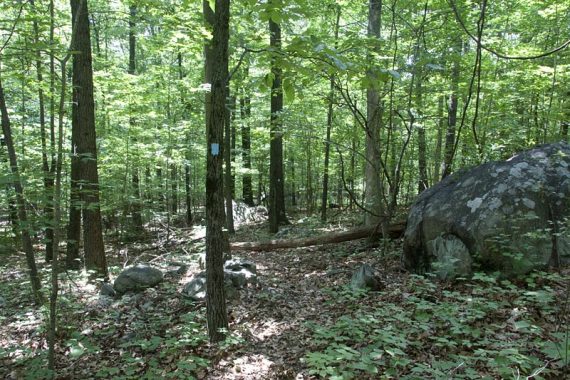 An orange trail marked “To Vacamas” goes off to the right eventually (not on the map), and we continued straight on BLUE Hewitt-Butler.

The trail ends at the parking for Camp Vacamas, where they kindly have a few parking spots for hikers (though in summer there probably isn’t any room).

Lake Larriwien is at the end of the lot, but it’s part of the private camp so there is no access for swimming or fishing. 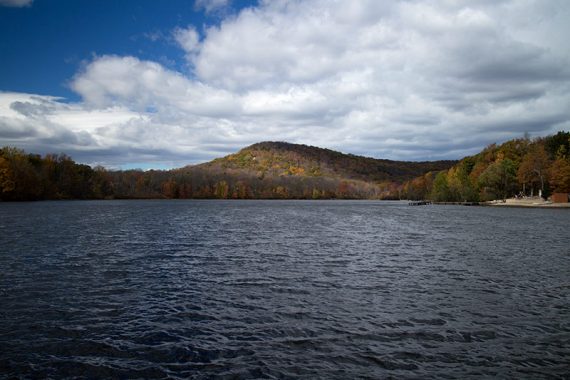 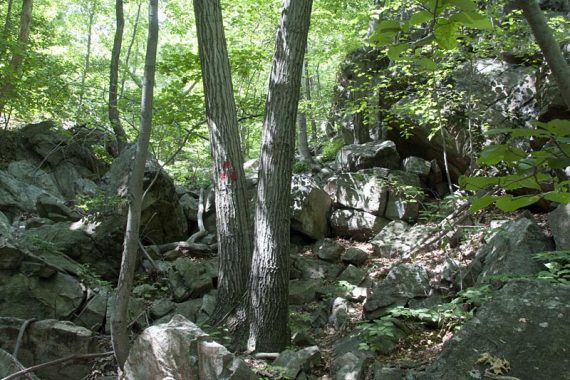 We took the RED Torne trail on the way back, and this was much shorter, level and shaded – after a minor rock scramble when you pick up Torne (RED) trail.

We decided against adding another part of the main Norvin to our hike for the day, since we’d taken longer than usual for this hike because of stopping for photo after photo.

And for the blueberries… that slowed us down too.

Route: BLUE (Hewitt-Butler) to end at Camp Vacamas and turn around, pick up RED Torne trail after Osio on the return trip.

9/2019: Updated the hike route and archived the prior info here:

Update 8/2016 – Updated description to remove the info to Lake Lerriwein for clarity. Added notes for a variation that involves the new extension of Torne (RED). Note: We’ve not re-hiked this since the change, so the Interactive Map/GPS file has not been updated.

*Update 9/2015: A change in ownership of Camp Vacamas has closed the Hewitt-Butler trailhead at Lake Larriwein with no trail access or parking so there is no point in hiking on without being able to check out the lake.

This only affects the longer route that continues past Osio Rock. The views end at Osio Rock and is where most people turn around anyway (though Lake Larriwein is pretty).

But to get in a hike longer than 2.4 miles now, you’ll need to cross Otter Hole and head into the trail system in the main part of Norvin Green.

Updated 10/27/14: Description updated to include the Torne trail bypass (black dot on blue is the harder route) and the Stone Living Room; new pics; GPX added.

8/2016: Archived the original hike route directions to here from the main page; can’t hike all the way to Lerriwein anymore.

0.0 – The trail is a bit steep right from the start. BLUE (Hewitt-Butler) parallels the road a bit.

Climb up to a limited viewpoint, then the trail comes up and around for a larger view. After this… it’s almost all views.

0.5 – In an open area with a stone chair and several rock cairns, look ahead for a faint path leading to the Stone Living Room. It’s easier to spot the living room if the trees aren’t full of leaves. After checking it out, retrace your steps and continue following BLUE (Hewitt-Butler). GPS: ToStoneLivingRoom

At one of the larger wide-open viewpoints is a stone couch and on a clear day the NYC skyline is visible. Scrambling up the large rock off to the side gives a better view of the skyline.

0.8 – New “easier” bypass option. Turn LEFT to follow BLUE (Hewitt-Butler) down switchbacks. It’s still steep in spots but not a straight shot over rock slabs like the original route to the right, now blazed BLACK DOT on BLUE (you can take this still, it ends up back on the main trail). GPS: TorneBypass1

1.0 – Continue following BLUE (Hewitt-Butler) as it turns to the RIGHT. [Pass the start of RED (Torne) Trail on the left, marked with 3 red blazes on a tree, somewhat easy to miss. This is the return route.] GPS: Torne2/Hewitt

[Short route: Turn around here for the 2.4 mile loop: retrace BLUE (Hewitt-Butler) until getting back to the junction with RED (Torne) and follow the description from mile 5.7 below]

—–
To continue on to Lake Lerriwein: Continue following BLUE (Hewitt-Butler) by scrambling down off the back of Osio Rock on rocky switchbacks before ducking into shady forest. Cross a stream on large rocks and follow a mostly level route with some hills.

2.7 – A sign with “VACAMAS” pointing right, with a three orange blazes on a nearby tree. Continue straight ahead, still following BLUE (Hewitt-Butler). GPS: CampVacOrange

After enjoying the view of the lake (there are some rocks to sit on at the edge), retrace the route back on BLUE (Hewitt-Butler), over Osio Rock, until arriving at the junction with RED (Torne).
—–

The rest of RED (Torne) is shady and level. [Variation: Continue backtracking on BLUE (Hewitt-Butler) for a tougher and longer route].

6.1 – When almost back at the road, turn RIGHT and follow BLUE (Hewitt-Butler) to the lot. GPS: Torne1/Hewitt

[Variation: Had enough hiking on trails for the day? Continue straight on RED (Torne) to the road, turn right, and walk down the road to the lot].