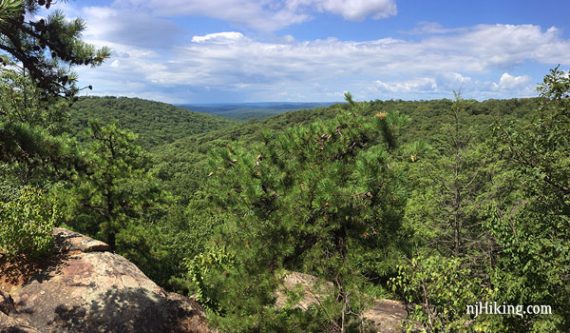 Hike the Seven Hills trail for plenty of views and fun scrambling in Harriman State Park.

Straight-forward route navigation, manageable miles with scrambling, and packs in a lot of really nice viewpoints.

We wanted a hike with decent hills and scrambling as trip prep so we modified the “Seven Hills, HTS, Raccoon Brook, Pine Meadow“ route we did last year for the same reason.

This route is shorter and also tackles the scrambling on Seven Hills going mostly uphill (more fun but easier).

We hiked this on a weekday and were able to park in the Reeves Meadow lot instead of along the road, something we haven’t done in ages. And we only saw a handful of people mainly near the trails around the stream.

And we ran into a rattlesnake.

Harriman-Bear Mountain Trails and use a smartphone to follow along our online map.

The visitor center is on the right with a small lot, and another small lot just down the road on the left… but they will be full unless you arrive super early so you’ll likely need to park along the road.

At the visitor center; open 8a – 5p on weekends March through October. No porta-john.

Or use the last rest area on the Parkway if taking that to the Rt 87 instead.

Circuit Hikes in Harriman has a lot of other great loops in this area and contains map diagrams. A few others are in Hike of the Week and Take a Hike New York City.

All trails are listed in Harriman Trails: A Guide and History.

0.0 – Start following Pine Meadow (RED SQUARE on WHITE) in the back right corner of the parking area (with your back to the road).

[Pine Meadow (RED SQUARE on WHITE) also goes in the other direction, for the main popular trail, and the return route.] 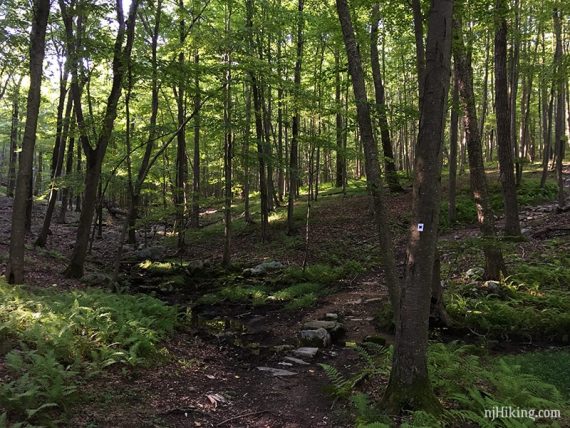 The views start, these early ones have visible power line cuts but as the hike progresses that disappears. 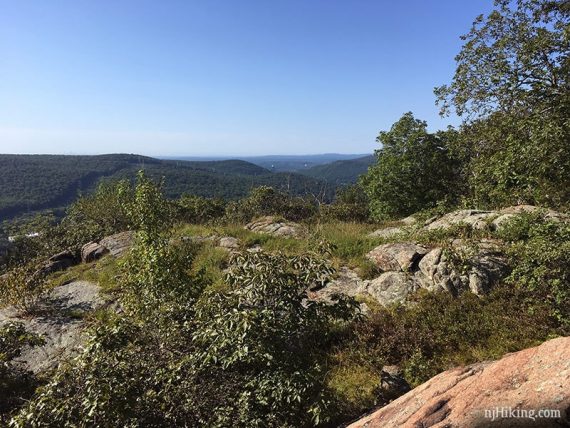 After it is co-joined with H-TS (ORANGE) for a bit, continue LEFT on Seven Hills (BLUE SQUARE on WHITE) where it splits away from H-TS. 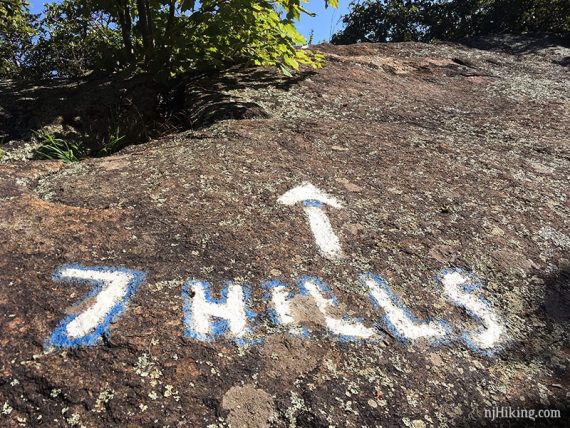 Scramble up and down for some views. 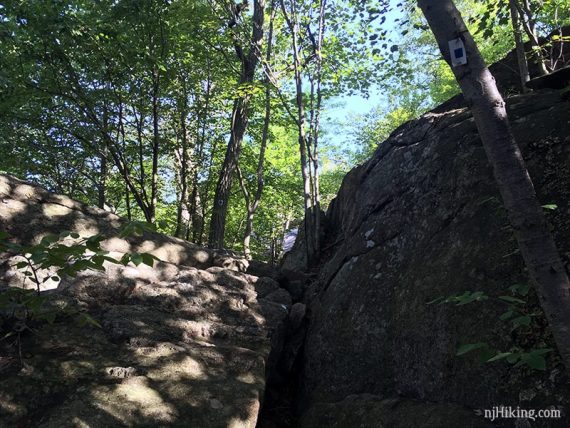 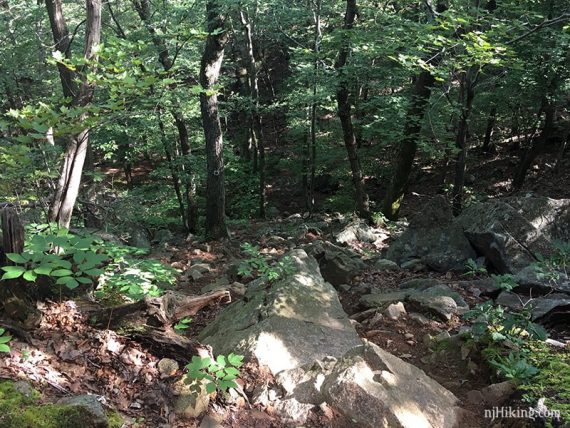 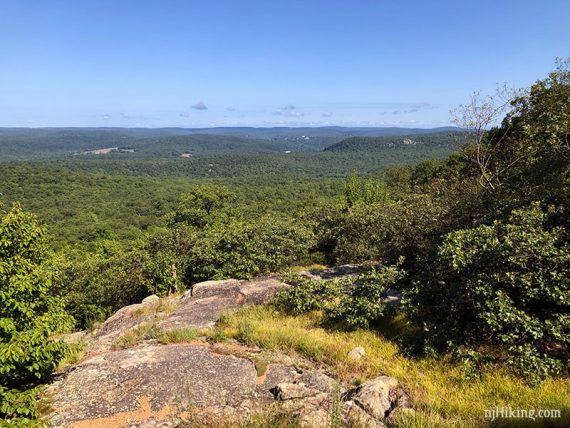 2.7 – Pass Raccoon-Brook Hills (BLACK DOT on WHITE) on the right.

Long uphill scramble on Seven Hills. If you’ve been using trekking poles, it’s worth it to stow them away for this stretch. 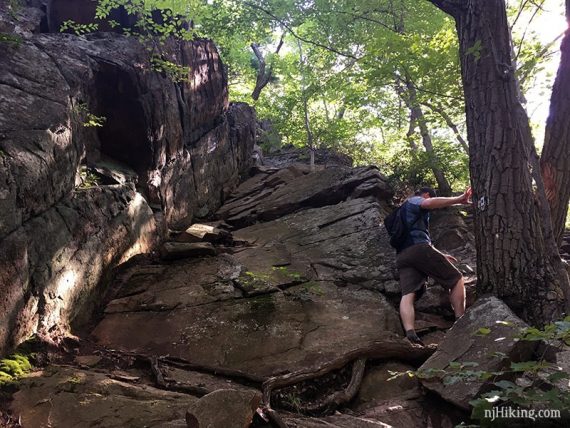 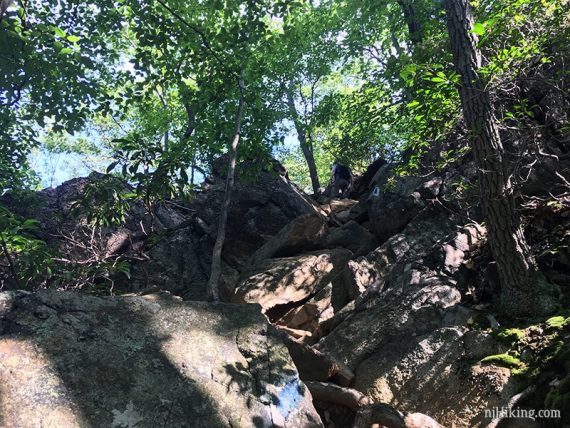 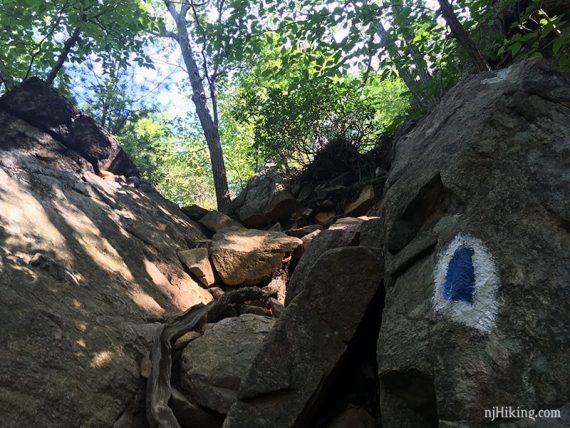 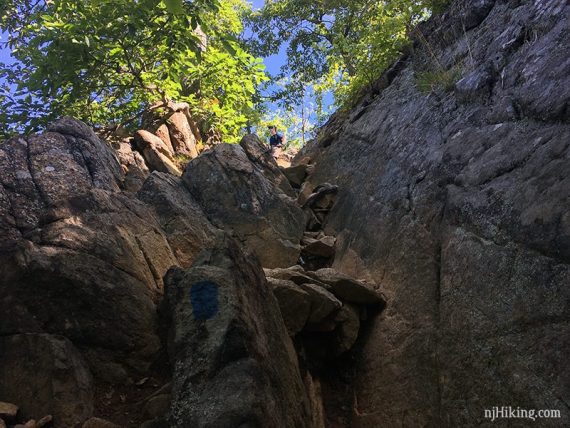 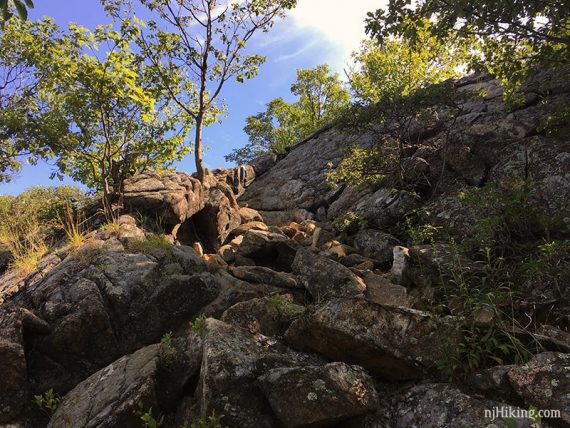 Reward that effort with yet more views. 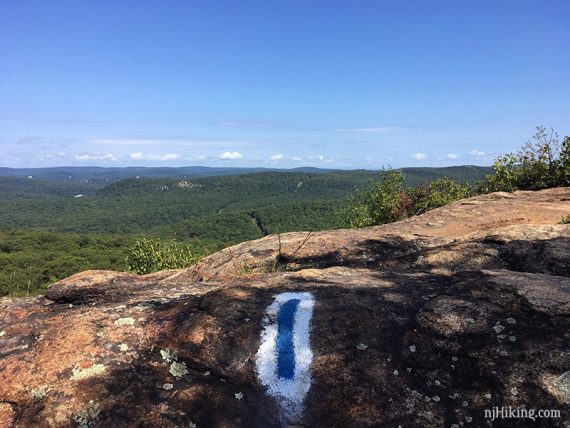 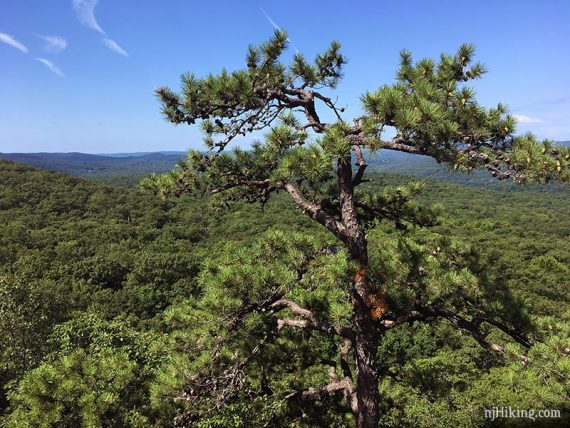 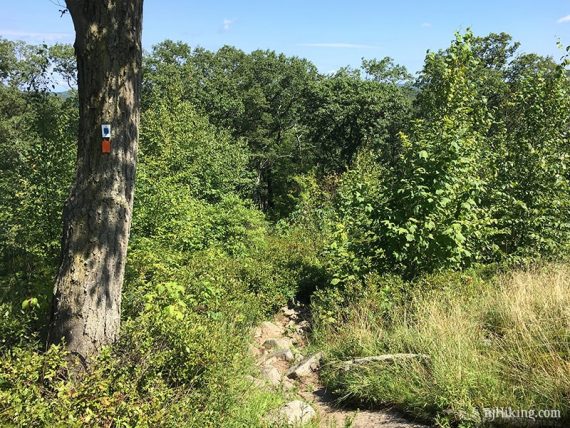 [The bridge was out when we hiked this but it was easy to rock hop next to it – if the water level is higher than it might be hard to cross.] 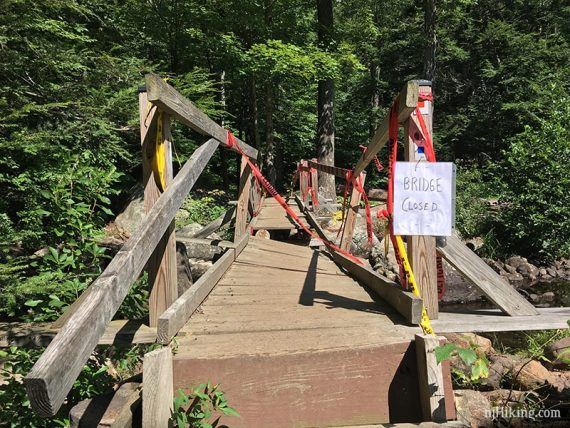 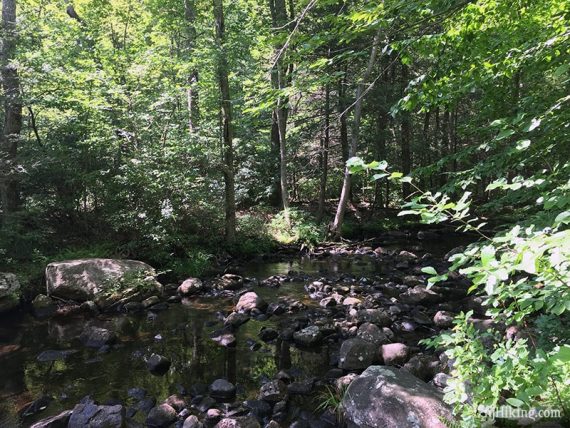 Continue on Seven Hills (BLUE SQUARE on WHITE) for some scrambles up Diamond Mountain. 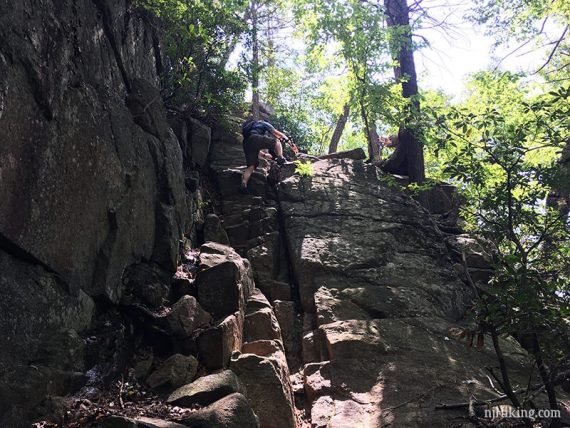 We made our way up this series of scrambly areas. Tom put his hand on a dead tree to steady himself and thought the sudden noise was buzzing bug, like a cicada.

If I was able to get out the words “snake” it probably would have been more helpful.

Coiled at the bottom of the dead tree was a decent sized rattlesnake, sunning himself near the protection of a rock overhang. 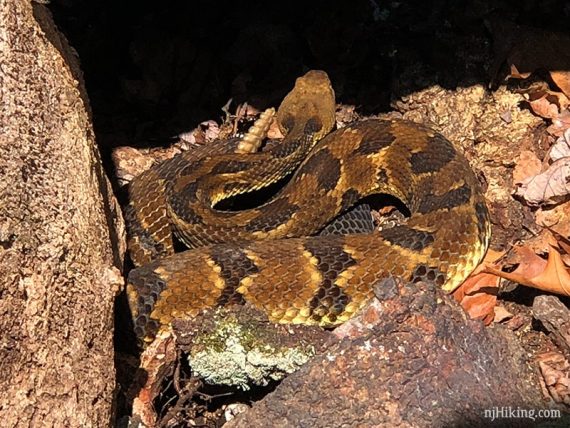 This photo was taken with a zoom from a safe distance, and I don’t think Tom was close enough to be in danger. 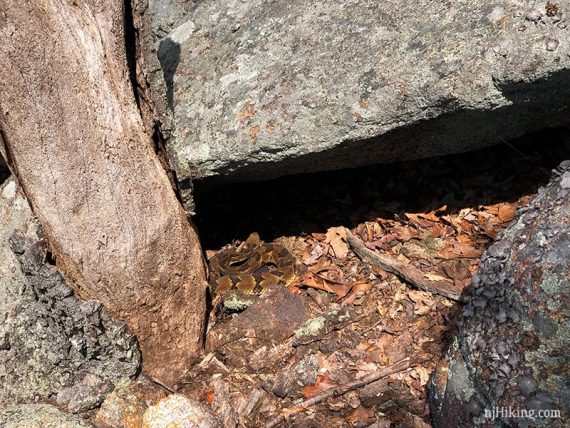 But still. Yowza. Beautiful snake though. We hike allll over and this is only the 3rd time we’ve encountered a rattlesnake – and they’ve all been in NJ/NY.

The first was in the Delaware Water Gap coming back from Sunfish Pond, and the other was in Harriman in 2007. (The dead one along the Rattlesnake Swamp trail in 2011 doesn’t count!)

A girl and her dog were coming down the trail so we explained the position of the snake and waited till she got past it without issue.

4.4 – At the top of the scrambles is a shady viewpoint so we took a deserved break.

The views here and from the rest of Seven Hills in this section were the best of the route. 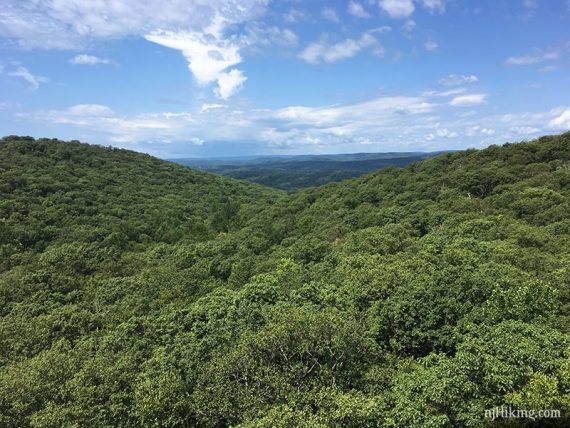 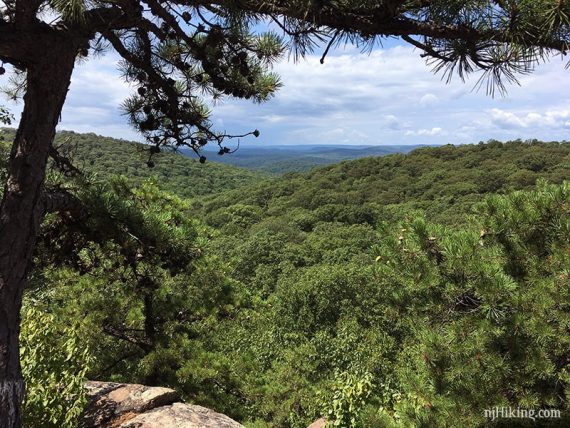 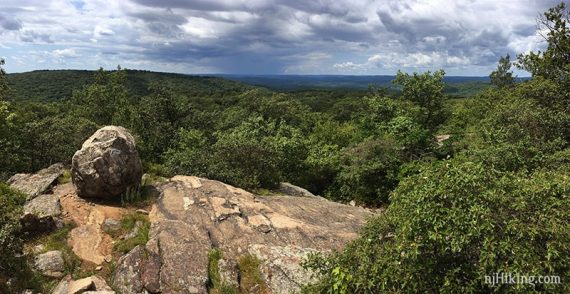 5.8 – Turn RIGHT to now follow Pine Meadow (RED SQUARE on WHITE) back to the lot.

Ate our picnic lunch sitting on the stone rail outside the visitor center. Venti ice vanilla latte and a nitro cold brew with sweet cream on the way home.
—
Hiked: 8/9/19.