We created this route to hit the majority of the viewpoints on the hills surrounding Ramapo Lake, then top it off with exploring the ruins of Van Slyke Castle. The manageable distance has easier woods roads sandwiched in between the very rocky and hilly sections for a bit of a break.

However, this is still a pretty rugged route and less-than-avid hikers will prefer the shorter Van Slyke Castle Loop version that cuts out the LeGrande Hill area.

There is very prominent traffic noise from 287 along the LeGrand Lake Connector at the furthest part of the loop.

The physical trails are the same but many names/colors of the trails across Ramapo Mountain have changed; this hike guide uses the new names/colors. Use the map on the park’s site linked above.

North Jersey Trails is recommended to navigate the network of trails in this park but the most recent version (2017) is out of date due these changes.

From points south: Rt 287N to Exit 57 to Skyline Drive. Pass the Lower lot on the left and continue on Skyline Drive to the Upper lot, also on the left. Medium sized dirt lot.

None at this or the nearby Lower lot on Skyline Drive (9/2021), and nothing passed on Skyline. Various stores in Oakland, Wayne etc.

0.0 – From the trail sign in the lot, start following Castle Loop (WHITE). Depending on what sign you’ve started at in the lot, it’s STRAIGHT or LEFT.

1.1 – Turn RIGHT to now follow Ramapo Lake Spur (BLUE-BLACK). Shortly, follow the trail as it turns LEFT and goes to a dam on Ramapo Lake.

From the dam there are wide views across Ramapo Lake.

1.2 – Pass the signs at a junction with the Legrande Hill Loop and continue on Ramapo Lake Loop (BLUE) a bit further.

Ramapo Lake Loop (BLUE) curves around with one more peek out to Ramapo Lake.

This portion of the route feels the most rugged and remote.

We almost hiked past this bear without noticing him. He was just casually sitting in the woods about 30 yards away, and couldn’t even be bothered to look over at us.

The photo is a grab from a very brief video we took as we continued hiking past him – while also scanning for cubs or another bear. Depending on the situation we would have turned back. Bears are common across New Jersey and while they generally couldn’t care less about you it’s a good idea to Know the Bear Facts.

1.6 – Arrive at a viewpoint over the Wyanokie Mountains and over towards Norvin Green State Forest. Ramapo Lake is visible through the trees on the right.

Continue on the rugged and rocky LeGrande Hill Loop (RED).

1.8 – Arrive at another viewpoint that looks over the surrounding hills.

Continue ahead now following LeGrande Lake Connector (RED-BLUE). [LeGrande Hill Loop (RED) continues to the left and loops back to the lake].

Another view is just past the intersection (#3 if you’re using our Interactive Map).

2.1 – Arrive at yet another viewpoint. Begin to hear the roar of traffic noise from Rt 287. It’s not a long section, and the trail is actually really nice, but for a bit you may be TALKING LIKE THIS and still not hear your hiking companions.

2.3 – Continue downhill on LeGrande Lake Connector (RED-BLUE) to another viewpoint (This is #5 if following along on the Interactive Map).

High Mountain is the prominent peak seen in the distance. A billboard on Rt 287 is noticeable but the actual highway is out of sight.

2.5 – At an old paved road, continue to the right on LeGrande Lake Connector (RED-BLUE). Pass YELLOW (Pool Hollow) on the left.

The trail surface is much easier for a few miles, often following gravel roads.

3.3 – Follow a short side trail on the right that leads to Ramapo Lake.

In 0.1 mile there is another viewpoint over the lake, then another while crossing a bridge.

Shortly, turn RIGHT and follow LIGHT BLUE to a wide area. To the right is a memorial plaque for Isabella Brodsky.

Past this is a rocky outcrop with lake views. Backtrack to the other side of the open area for a view of an island on Ramapo Lake.

Follow LIGHT BLUE back and turn RIGHT back onto Ramapo Lake Loop (BLUE).

Pass two cement posts that flank the driveway of the old mansion.

4.4 – A viewpoint off to the left is the reward for that steep push uphill. Ramapo Lake is seen below.

Continue on Castle Loop (WHITE) and climb a short wooden stile over a stone wall.

Another viewpoint – similar to the previous, but from higher up. On a clear day the NYC skyline may be visible. It was too hazy to see anything the last time we hiked, this is from 2013:

Soon the ruins of Van Slyke Castle come into view.

Van Slyke Castle was first known as Foxcroft (named for Fox Mountain) but after William Porter died his widow Ruth remarried Warren Van Slyke and they changed the name.

After the Van Slykes died, the castle was sold a few times, abandoned, and later burned in 1959. [Source: Trail Conference guidebooks and summarized from various website sources.]

The trail runs along the outside wall of the building but you can (carefully) explore all through the inside of the ruins.

There are lots of interesting angles, textures, and colors so it’s a fun place to photograph. It was hard narrowing down which shots to show.

Vegetation is overtaking the stones and trees have sprouted up in the middle of the mansion.

Of note, the graffiti on the castle and water tower ruins is now very excessive compared to years past.

The path splits after walking around the side of the ruins.

Head to the right where stone pillars and wall flank the path. Behind a small stone building is another viewpoint.

The back of the mansion has steps and a large section of intact wall.

Head back to the split and continue on Castle Loop (WHITE).

4.5 – Soon come to the remains of the cement pool for Van Slyke Castle. There were two large frogs chillin’ in it.

In just a bit is another fine view on the left. This looks west, past Wanaque Reservoir towards Norvin Green State Forest.

4.7 – Approach a large stone tower that once held a cistern that supplied water to Van Slyke Castle. A pipe is along the trail.

The front of the stone water tower has an entrance.

The stone foundation that held the cistern can be seen inside the tower.

Just past the water tower ruins is yet another view of Wanaque Reservoir.

Continue on Castle Loop (WHITE) as the route makes several turns. The trail briefly turns right onto a wide sandy road for a pipeline. Cross a stream.

5.1 – One last short push uphill on a rock slab. Come to an intersection with Cannonball (White C on Red Circle) near Skyline Drive. 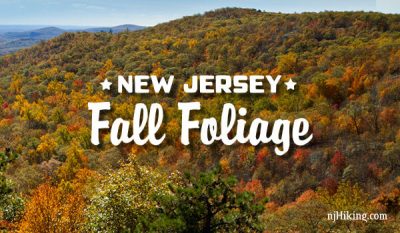